Blogging or the Lack Thereof in the 1st Quater of 2016 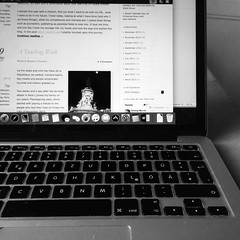 Now, that it is April, it is time for another one of my stats posts. I like to do these on a quarterly basis, to look at my blogs progression, not too much to compare myself to others, no, to compare my blog to itself.

With the Advent Calendar in December 2015, last year finished on a high note stats wise, you can read more on it here. I had a total of 2 189 views (it says 2188 in the post, so I guess the stats page was not 100% up to date back then) for December, my blog has since then not had so many monthly views… But the year is still young, and as I had been on quite a long blogging break, due to my mom’s bad health and passing away. Here you can have an idea of how my posting suddenly changed:

In my previous stats post I said that I would be moaning about a client, who had not paid me, well be assured, I was finally paid in the beginning of the year, without any late fees, but I was paid.

But to the details…

In mid March, I came back to blogging, after letting my readers know what was going on in the beginning of the month. I gradually started to visit other blogs as well, which has helped my views to grow again. In March, my blog had a total of 1420 views by a total of 597 visitors. I posted 13 posts, the first one announcing the loss of my mother, a post that became highly popular on the 7th and 9th of March, I do think that it was shared on Facebook, by a member of my family. Of those 13 posts was a guest post for Discovering Traditions, Gulara Vincent came back to my blog for the 3rd time (and definitely not the last, I hope) to share Novruz with my readers and myself, which is a Spring Festival from Azerbaijan. (Guest post 7,7% of the month’s posts)
The 3 most popular posts of March were: Breaking the Silence (296 views – 20,8% of the month’s views; I do think that this must be my most viewed post so far), Discovering Traditions: Novruz – Spring festival in Azerbaijan by Dr Gulara Vincent (74 views – 5,2% of the months views), Dear Blog (62 views – 4,4% of the month’s views).
3 main referrals: Facebook (186), Search Engines (116), WP Reader (80)

This is the first time that I looked in a bit more detail at the referrals. I have come to realise that suddenly Search Engines, mostly Google Search have started bringing me a good chunk of traffic every month. December of 2015 was actually the first time that I received significant traffic from them (86), in the months prior to that it never exceeded 35 referrals. Maybe it’s because I have suddenly turned into a SEO Goddess, or because I have so many posts that there is something to lead a searcher to, or maybe Google changed some things? Really, I have no idea, most of the time I cannot even see what the searches were.

I think the best thing to do for me at the moment blog wise is to continue being and eclectic and authentic blogger.

At the beginning of 2016 I was still working only with a few clients, most of them established since a long time, which the truth be told is a good source of income when you are a freelance professional. I worked with/for 10 different clients, some were only for a few lessons, while others are there for a more serious long term. 4 of them are both clients and students, which in this case means they are adults. The rest are school students, meaning that my clients are the parents. I have probably had the best income since I started, at least since I started working again after my daughter’s birth.

I have come to realise that I massively enjoy working with adults, and I am planning on deepening my client portfolio, as I am now proposing skype German lessons, so wherever you are in the world I am ‘there’ to work your German with you! (I will be putting up a page for my German lessons in English very soon, for the moment there is already one in French).

Finally, I have started to think about the option of maybe crafting some online courses that I will record and then propose on teaching platforms. I am sure that I will be writing about that in more detail once the A to Z Challenge is over…