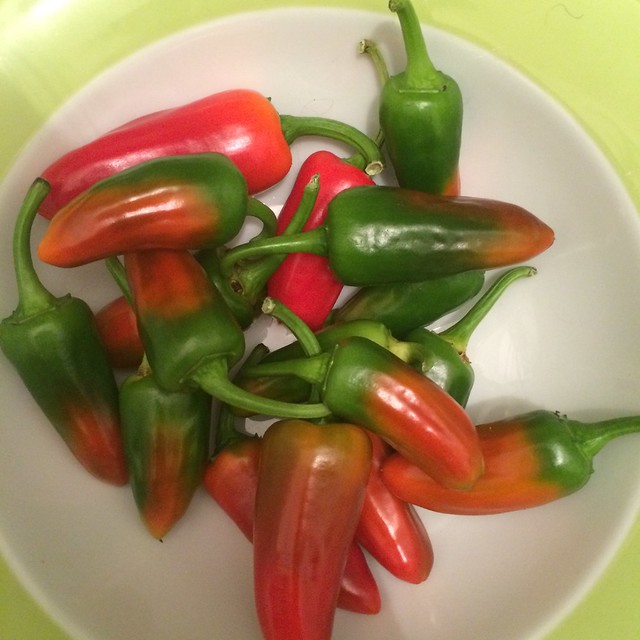 These peppers were meant to be small. This is the 3rd year that we have grown our own peppers. Christmas 2012 we got some tiny peppers, but quite hot peppers in Germany and baptised them Piments de Iena as we did not know their name. We planted some seeds and were rewarded with many small peppers as the species (don’t know it’s real name) grows a lot of fruit. Then we planted a few seeds again.
This Spring for the 3rd time in a row we took the seeds of our cross and sowed them. This time we opened a dry pepper and put the seeds into the soil. To our surprise all of the plants that grew nice and strong started growing huge pepper crops except for one that kept the original size. Now, I know that cross pollination must have happened, especially seen the fact that we had a few bell peppers next to our tiny peppers. We even tried to grow some habaneros in the past or “habs” as the connoisseurs call them, but they do not do so well in our climate on the windowsill. What you can see in the bowl above are the peppers of one single plant. The outcome of the crossing of tiny peppers and bell peppers did not turn out too badly: we have the yield of the tiny peppers, the heat of the spicy peppers but we approach the size of some more impressive peppers.
I have already saved some seeds of this lot, but I am definitely not sure if they will grow again. The likelihood of them being sterile is there after all.

As I joined NanoPoblano for this November and am thus a Pepper, I figured that sharing my peppers is a good idea.