I had been pottering round aimlessly when I ‘should’ have be doing dire things to the inner realms of a turkey and creating havoc in the kitchen. That year however, for the first time in my adult life, I was not cooking Christmas dinner and had no preparations to make. A few simple gifts were wrapped and the tree was lit. It felt weird just for me and the dog, even though it I knew it was simply a natural progression.

Okay, I may have been feeling a bit sorry for myself. It felt strange not being able to do the things I was used to doing. Then I got to thinking back, counting the years since the last time I hadn’t made dinner. I recalled that Christmas very well. My last before I became a wife. That was a first too… the first time I would not spend Christmas day with my own family and I was quite upset at the prospect.

I had been invited to lunch with my fiancé’s family who lived some miles away across the city. There would be few buses and I needed to leave early in order to get there at all. Everywhere had that stillness and silence of early Christmas morning. Dressed in my best I was shivering in the cold Yorkshire air as I crossed the footbridge over the motorway. An old tramp shuffled slowly towards me from the other end of the span. Everything about him was grubby brown, from the flat cap pulled down over his forehead, to the bushy beard jutting out like a sepia Santa Claus.

“You couldn’t spare the price of a mug of tea, could you?” I shook my head; I only had my bus fare. He shrugged; his voice was cracked, his old leather face lit up with a smile that revealed toothless gums and kindly eyes that sparkled. You couldn’t help smiling back. “Never mind. Merry Christmas, lass!”

“A bit parky.” He shivered and stopped, so I did too. “Why aren’t you in the warm, lass?” I explained and we chatted for a good while as the wind whipped around us. He told me about his own youth, Christmas round the fire with his family, about his marriage and the wife lost long ago. “You’d best be getting along then.” He nodded and held out his hand, taking mine in both of his. “Bless you for stopping, lass. You’re a star.” There were tears in his eyes… or perhaps it was the wind, for somehow mine were damp too as he walked away. I ran after him and gave him the bus fare. Enough for breakfast and a mug of tea. I could walk. When I turned at the far end of the bridge he had gone.

I don’t remember what presents I got that year. I don’t recall how the day went, what lunch was like or even just how late I was when I finally arrived on foot. I remember the old man vividly though. He may not have really needed the money, he may have had more in his pocket than I earned in a week, working at the butcher’s shop after school. It didn’t matter, because he taught me that there is real truth in that old saying we had drummed into us as children… that it is better to give than to receive. I only gave him a few coins, His gift to me was to teach me something of the real spirit of Christmas and give me a memory that has lasted a lifetime.

That morning a package arrived. I had ordered something, so thought nothing of it as I ripped open the paper. However, it wasn’t what I thought and opening the little box I stood incredulously looking at the jewelled star nestling in the satin. The inscription told me it was an unexpected gift from a friend I haven’t seen for years, not since she moved abroad. I hadn’t heard from her in a ling time. I couldn’t believe it. Slipping the heavy silver ring onto my finger it fit perfectly. 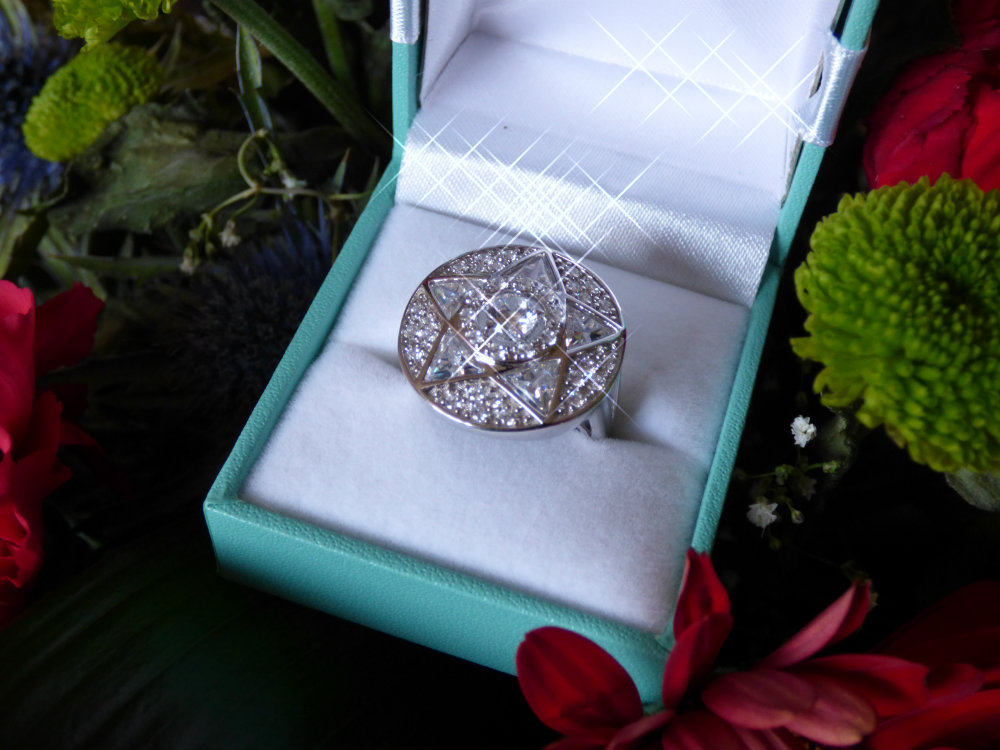 I held up my hand to look and my eyes filled. Through my fingers I could see cards from across the world, a necklace, a snowflake for the tree… flowers and chocolates, a pile of books and films… and the little gifts waiting to be taken to my sons on Christmas morning.

All of them were gifts… received or to be given. It didn’t matter what they were, they don’t have to cost the earth, they are only symbols… it matters only that someone has cared. A gift can simply be a thought, a moment, a phone call or an email… every gift that is given from the heart has one thing in common… love. Looking through the starry sparkle on my finger it was love that I saw there.

In the Christmas story a star guides the wise to the place where a child is to be born who will bring a message of love to the world. That Christmas Eve a star reminded a fool that Love is the greatest gift of all.

Sue Vincent is a Yorkshire born writer, painter and award winning poet. She is also one of the Directors of TheSilent Eye, a modern Mystery School. Sue lives in Buckinghamshire, England, having been stranded there due to an unfortunate incident with a pin, a map and a blindfold; a temporary glitch of some twenty years duration. She has a lasting love-affair with the landscape of Albion; that hidden country of the heart that is the backdrop for many of her books, particularly those co-authored with Stuart France.  She is currently owned by a small dog who also blogs and who gets all the fan mail.