In the heart of the French kings’ hunting grounds one can, under contrition to keep the eyes and spirit open, come across a magical fountain or spring. It is the Fountaine de l’Étoile de Montaigu or in English: Fountain of the Montague Star.

Already the name is rich in beauty and fuels imagination…

The spring itself is mysterious. Water a colour of blue, it is not the blue of the sky. Where does this colour come from?

Is it drinkable? I don’t know.

In the area where the fountain is located, many things go by the name of Montaigue or Montague, I lived there while in high school, and was thus constantly reminded of Romeo and Juliet. It was not until spring this year, on a nice little walk in the forest, that I came across this fountain of love.

So today I want to share a short story with you. 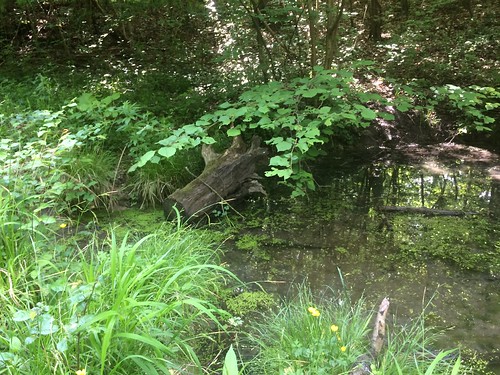 The Fountain of Love – a short story

“Mom” the little girl innocently asked “why is it that you love Dad so, so much?”
“Nina” her mother replied, “why are you asking this question?” 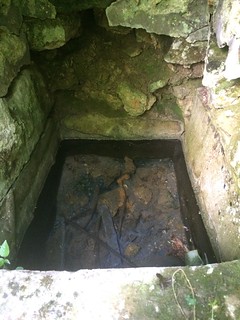 “Well, grandmother said the other day, that you were heartbroken and had made a pact with a friend.” she paused, “Never to love again!”
“Oh, that story…” hinting at the sofa May added “let’s sit. I guess your grandmother is right, you are old enough to find out”.

With her daughter snuggling against her, she took a deep breath and started to tell her proper love story. “When I met your father, I was heartbroken. I did not ever ever ever want to love anyone anymore. I was done with men. After all my fiancé had left me the night prior to our wedding”
Nina looked at her mother with shocked eyes and interrupted: “Really?”
“Yes, my dear. There I was, my heart that had been filled with love, and joy, was broken. My life was a big lie, broken promises everywhere. I had been certain that he had been the love of my life. But you know what?”
“Erm, no mom.”
“He left me for a person I cherished a lot, for the girl I had considered my best friend, the person who was meant to be my maid of honour!”

Even though she was still very young, Nina was gifted with a wisdom, with sadness in her voice she said: “I understand that your heart was broken.”
“Oh, Nina! Don’t worry about it today, I will protect your heart with all my might. And now I know, it was only half as bad as it sounds. I now consider myself lucky.” before her daughter could interrupt her again, May continued with her story. “I had made a pact with a friend, that I would never ever ever love a man or even a woman again”.

She got up from the sofa to put on a kettle, while her daughter arranged some cookies on a plate. For some things they needed no words.
“And that’s when you met dad, right?” Nina asked with impatience, jumping up and down in the kitchen.
“Not so fast young lady. First, let’s grab a blanket and make ourselves comfortable on this story evening”.

Sipping her rea, she continued her story. “So where was I?”, she cleared her throat, “I was taking a walk in the forest, looking for mushrooms. Most of all I was trying to forget my broken heart. I want to hide away form life, disappear.” She glanced out of the window, how would she love her husband to be there to tell their story with her. “And I got lost. The night came far quicker than I had expected.”
“Oh mom, it sounds like a fairy tale!”
“Well, maybe. It was summer, so the cold of the night was not as intimidating as it would have been a few months later. I found a hollow tree in which I curled up.”
“You must have been scared Mom.” Nina whispered, trying to snuggle even tighter.
“You know, I was so sad and tired that I never actually had the place in my head to grow scared. I don’t remember the night, I just slept.”
“And that’s when you met dad?”
“Do you want me to continue or not?”
Nina smiled and nodded so that her mother would continue telling the story.

“In the morning, I woke up thirsty as my mouth had run dry over night. And before I could remember that I was lost, a young man appeared, not older than myself.”
“Dad?”
“He spotted me all curled up and shivering inside the hollow tree. I guess he knew that I wasn’t some crazy person sleeping out there in the forest.”
May turned to her daughter her eyes sparkling with love.
“He said ‘good morning” she went on “and helped me up. His hands were strong and there was something comforting about them.”
“You fell in love then?” the girl interjected.
“Not so fast!” she calmed her daughter. “it felt good to be around him, but everything inside of me was asking for water, I needed to rehydrate myself.”
“Mom, rehydrate, what does that mean?” Nina gave her mother a puzzling look.
“Erm, well I really needed to drink. His caring eyes noticed that something was up.”
“He was already in love with you?”
“Well, I am not sure, it was likely. Within my broken heart something was stirring, but I am not sure what it was. ‘Water’ I mouthed and coughed. He started apologising about how he had taken no water with him on his morning and told me that he was thirsty himself.”
“That’s when you had the famous drink?” 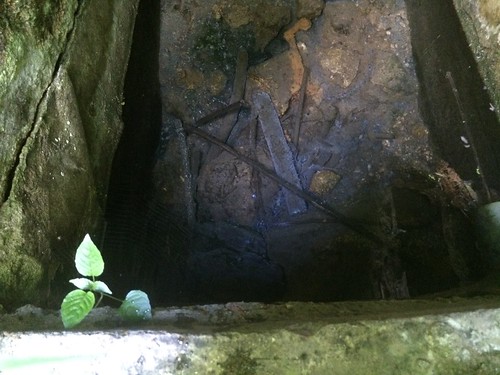 “Shhh, don’t give everything away. He said that he had seen a fountain not far away. However he had no clue if the water was of drinking quality. I did not care, I was just really, really thirsty. When we arrived at the fountain, it seemed as if magic was in the air. The fountain was of a strange colour. Well I mean the water within the fountain was of a strange blue. After a very short hesitation, we both cupped our hands and started to drink the refreshing water.
Our thirst quenched with the magic elixir, we both looked up. Our eyes locked and nothing was like it ever was before. We both leaned in and kissed. No kiss had ever tasted. I was hooked like a fish, I wanted more. I was unconditionally in love.”

“And was dad that much in love with you too?” Nina asked after a small silence.
“Yes, so was he. I finally knew what true love was, and my heart was mended quicker than I could leave that forest.”

Nina’s eyes were gleaming, “was it that fountain mom?”
“We like to say that we found the fountain of love, after all we never found it again. But I think that we were just meant to be, it has nothing to do with that water.”
At the sound of a car pulling up in the driveway her eyes that had already been filled with love were like fireworks. “I think your dad is finally home.” 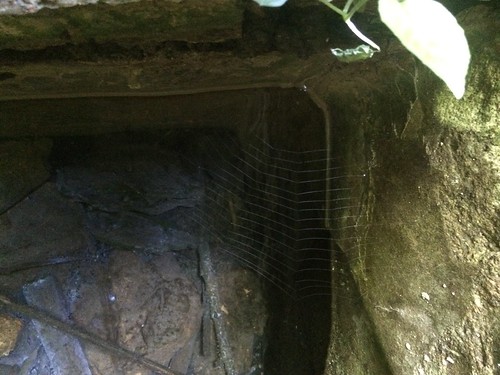