Cold, blue sky, sun, and smog! For a few days now the level of pollution inside of Paris has drastically risen. The beautiful winter weather is disrupted by a high amount of micro particles. In Paris this phenomenon has been happening a lot since 2014, I am not sure about the years prior to that.

When little one was a few weeks old I noticed for the first time that I could not see very far, my vision went blurry. I at first thought that this was due to my eyesight having changed during my pregnancy. But actually it was smog. Now I have an app on my phone that regularly gives me pollution alerts.

Smog is not fun, you think it is a beautiful day, but then you tire quickly. We have had pollution alerts in the past where we were advised not to go outside with small children, or to do any physical exercise that needs more breathing.

Ever so often car are restrained in their circulation rights, depending on the license plates. People are asked to use more public transportation and carpool. The only problem with public transportation is that the exposition to micro particles is often higher inside the metro stations than outside.

Besides alternate circulation, the city of Paris takes more and more steps to make the air cleaner. Thus over time diesel cars will disappear from the streets of Paris. You can borrow bicycles, called veilb’ at around 1 800 stations. You can borrow electric cars or autolib’ at those stations you can also refuel your own electric car. The newest addition is Belib’ stations, which are there for recharging electric cars at different charging speeds and thus at different prices (really not that expensive). Even the public transport system has become more attractive, at leas for Parisians. Ever so often there are free days to promote public transportation or because there is a climate related event or because there is well too much pollution… The monthly ticket pass navigo is now a single fee for all zones, at around 70 euros when before it cost between 65 and 100 something euros depending on where you live/work/study…

But not only the means of transportation are fighting pollution, the city itself has started to change a bit. You might recall me writing about the Berges de Seine, well currently the banks on the left side of the Seine are a nice promenade, but the Maire of Paris, Anne Hidalgo and her team are working on a project for the right banks of the Seine in Paris to be turned into a big pedestrian playground. And now this will make so many tourists’ hearts melt, the Avenue des Champs-Elysées will be accessible to pedestrians one Sunday per month from April 2016 onwards. In September there was a test Sunday, and walking on the popular avenue was definitely a cool thing to do. 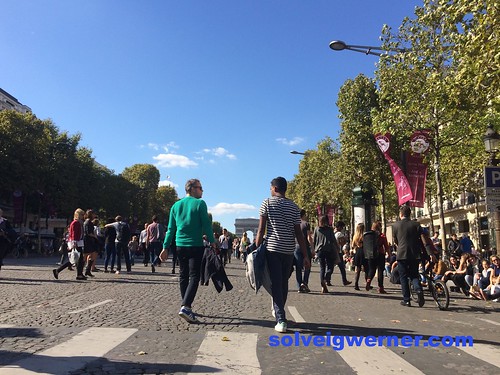 I now just hope that all of these actions to make Paris greener and less polluted will actually help. But having things accessible to pedestrians is such a positive evolutions, especially for people like myself who don’t even have a licence 🙂

How polluted is it where you are? What are the local politicians doing against pollution?

10 thoughts on “Pollution in Paris”