R is for Rainbow 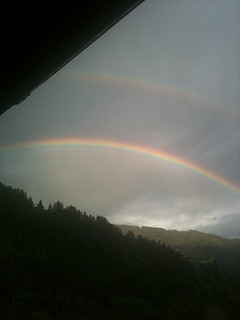 When water and sun meet we are lucky to see a rainbow. When in the biblical story of Noah’s arch the rainbow is seen, it is interpreted as a sign of hope, a sign that it will not be raining forever.

When I see a rainbow, I make everyone around me look at it too! It is just too magical to be missed out on.

I recall the little rainbows that formed when I was playing with the water coming out of the garden hose. What a discovery! I started to understand how rainbows are made.

I do suppose that like me you have not found the pot of gold meant to be waiting at the foot of a rainbow. Those rainbows you can see in the photos, where not at all far away from where we were, but we could not make it to the foot of them. Maybe another time, and Austria isn’t Ireland, Leprechauns are not the magical creatures lurking there, even though it is a very magical place indeed. 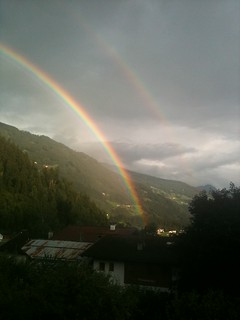 When I “captured” those beautiful rainbows with my phone in 2011, it was my sister who had called us outside, to share the beauty. There was not one rainbow, no, not two either, there were three! But the third and highest one was too faint and fading too quickly to be photographed. Maybe it burst and became many, many little butterflies?

There is a beautiful story in which an inventor, whose grandfather invented the rainbow, is desperately trying to invent something beautiful. One day he breaks up a rainbow into thousands of pieces and makes them fly, they are butterflies. Do you know this story?

How many rainbows have you seen at one time? Have you ever managed to find a pot of gold at a rainbow’s foot? 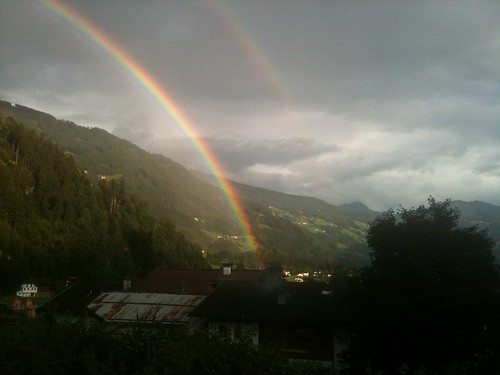 11 thoughts on “R is for Rainbow #AtoZChallenge”