F is for Fire 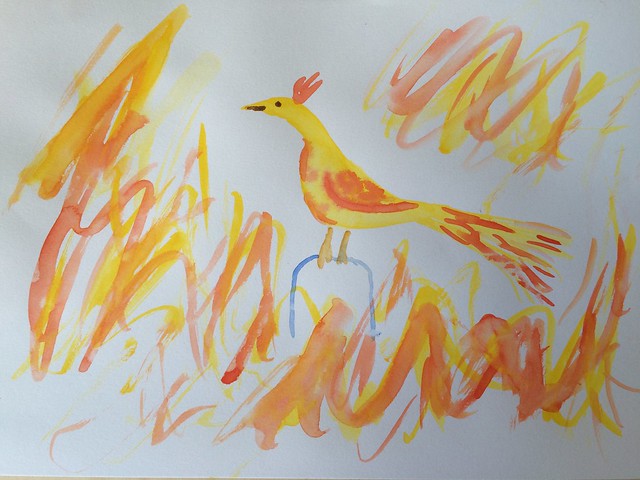 Fire has often played a major or minor part in my life, this post might not be everyone’s cup of tea, but maybe it can give you some safety advice. I am using today to help myself cope with a trauma.

Exactly 3 months ago, on the 7th of January I was woken by the smell of something burning, shortly afterwards two firemen were knocking on our door, as they were hoping to get a better look at the roof of the car dealership and mechanic that was in flames next door. I mentioned it in my very first #weeklysmile post. On rainy days the smell of old fire lingers in the air when I walk past the building. It’s only now that they are slowly starting to stabilise the building, for two months no one was allowed to access it, as there must have been dangerous fumes in the air (I think something like 17 cars burnt and more than one floor was touched by the fire, according to the police writing posted on the door, one floor sunk 10cm). What did freak me out a bit more was when for three days straight last month a fuel truck showed up to extract the fuel stored in the building, 3 fuel trucks full of heating oil, gazoline or some other highly inflammable substance, it could have been really bad 3 months ago…
That morning the firemen reassured us and told us we could stay, once they showed up for the second time we took the decision that little one and I should go to my parent’s house, as not to evacuate in stress with a toddler.

About 6 years ago, I woke up when I heard one of my flatmates screaming “FIRE!” I got dressed, grabbed my handbag (containing my passport and wallet), my phone and my keys. Opening my door my eyes fell on a brightly lit kitchen, which was on fire. I made for the door, down the stairs and knocked on every door on the way, yelling that there was a fire. The fire alarm was sounding loudly, but as this happens quite often in University housings, it is important to tell people that this time it is real, especially when it is 7 in the morning on a Saturday.
My flatmate called the fire department, at first they did not take her seriously… She yelled at them quite convincingly. When, after what seemed like an eternity, the firemen arrived, a new problem, the apartment was not accessible as the door was closed. Luckily, I could produce my keys, but as I was shaking all over (an old trauma had been triggered), I was not willing to approach the house, my flatmate took on that task.
The fire had been caused by a pan with chickpeas that had been left on the stove, one of the girls always cooked at 6 in the morning, but never stayed in the kitchen when doing so.  Thus when she had thought that she had turned on under her pan, she had actually turned on underneath another. It could have been avoided had she checked that the right pan was cooking, and had she stayed in the kitchen, or at least checked on her food all the time, for  there to be a blazing fire she must have forgotten about her cooking for a very long moment.
A few days prior to this fire, my flatmates had a party. Ballons were attached to the ceiling. For some reason, a member of staff of the university housing had been to the apartment on Friday, he told my flatmates to pop the balloons as they could be very dangerous in the case of a fire. On Friday afternoon, they weren’t happy about this, all their beautiful decoration was gone, on Saturday afternoon, they were really happy that they had popped those ballons.

It doesn’t end here though. I had a small cooking fire accident myself. I was fourteen and wanted to make some onion soup. As I had learnt from the friend who had sought me the recipe, I let the pot heat a little before I added the oil. Oh, oh, oh, what a mistake! I didn’t have the timing right and the bottom of the pot was so hot that the oil caught fire right away. I called my dad, who was in the dining room, he grabbed the pot with some tea towels and took it out into the backyard. I managed to keep my calm, turn of the stove and even open the door so that he could go outside. But five minutes afterwards I was a teary shaking mess, as my trauma had resurfaced.

If you have read this far, you might ask yourself: So what is this trauma? What exactly happened?
When I was 5, 5 days prior to the birth of my sister, I was allowed to light candles in Kindergarten. We were going to practice for a candle walk for our Christmas show. As I was very “mature” and a bit of a favourite for the women working in the Kindergarten, I had the right with 2 other kids to go into the basement and light the candles.
For some reason, no adult had joined us.
I started to light the candles. I started with the ones in the front and then reached over to light those in the back. Suddenly I saw that my left arm was burning. I ran towards the steps screaming, looking in terror at my blazing arm. NEVER LIGHT THE CANDLES IN THE FRONT FIRST! PROCEED FROM THE BACK TO THE FRONT!
Luckily there was a burns specialists a few streets away, this way it was avoided that my skin was removed with my clothing, something that very often happens. In the case of being burnt by fire you have to make sure that there is no more fire, but you should not take of the layer of clothing closest to the skin, this has to be done by a doctor. This way bigger scars will be avoided!
I must have been shaking all day.
Even though the burns specialist had proposed that I was operated, that skin from by butt would be moved to my arm (or something like that), my parents decided to consult with a different doctor. I was lucky to be treated in a paediatric hospital, where they advised that I should not be operated, that this was a decision that I could take myself once I was 18.
For months there was daily commute to the hospital, I had to get my cast checked and my creams reapplied, until eventually my parents were allowed to do this themselves. Then for years (until I was about 9 I think) I wore something like a very tight sock on my arm, to avoid the bulging of my scar. Thus the scar of my 3rd degree burn is nice and flat.
I did not opt for an operation, by the time I was 18, the scar had become part of me. Seen that for years it had been covered, I had never been teased about it, I have always been very confident about my scar. When I told other kids my story, they were sorry, they showed compassion and they learnt an important lesson when it comes to fire safety.

I have no idea if people notice my scar, they probably do, but many won’t talk to me about it. I don’t mind sharing my story, as it helps me with my trauma, and it helps others adopt safer habits when lighting candles.

23 thoughts on “F is for Fire #AtoZChallenge”