B is for Book

I read the book, quickly, the way I devoured the likes of Harry Potter and other childhood favourites. It was the first time that I read an ebook and that on my phone. I suddenly had a hard time putting down that computer we call phone (I don’t actually use it that much for calling). While I read the book, about the three ghost children, who had way too early lost their lives and who were stuck in our world fighting evil entities and trying to figure out how to go to the nice place, I thought of my mom, because I was sure that this was the type of story she would love to read. 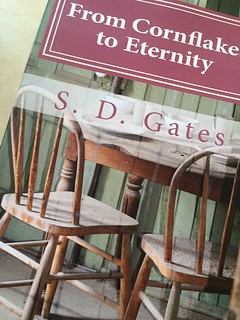 The book, From Cornflakes to Eternity (here’s my review of it), written by fellow blogger S.D. Gates, who I had the pleasure ‘meeting’ during last year’s A to Z Challenge, she was too late to sign up on the official website, but participated anyways, I am glad that she did, because I might not have found out about her first book. I found out after the challenge that she had a book out in the wild, waiting for reads and reviews, when she had a special offer for it on kindle. So yes, I read it for free, but reading it I longed to pay for what I was reading. So gifting it as physical book to my mother did seem like a great idea. The fact that I was reading such a well written and researched book lead me to talk to my mother about her books, which she had written but had left in boxes years ago, after a negative reply from a publisher, or in the middle of an editing spree. I wanted her to take the bull by its horns and finish editing those books and publish them traditionally, or self-publish, to send them onto their next adventure, being discovered by readers. I proposed that I would help her with all that, the editing, the formatting, the marketing, even though I had no knowledge at all.

Suddenly, I found myself hesitating. Should I give this book to my mother or not? My sudden change of heart came from the fact that she had been diagnosed with cancer, already at an advanced state. Was a book dealing about too early death, and the question of what comes after death really what she needed now?

I talked to her about the book, as the story had its hold on me, and eventually proceeded to purchase it. And I am glad that I did. She read it in the summer recovering from a chemo. It captivated her, she wanted to know what happened next. She told me that the book contained so much truth. So many lessons that we should all follow. 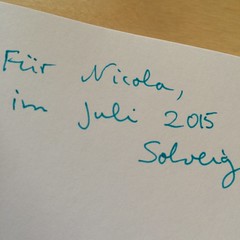 It was one of the very last books that she did read in her life. I am not sure how many more she read after that one, but I don’t think that it were too many. When I gave it to her I made sure to write a dedication into it, so that she would always remember who gave it to her. Last weekend, I took the book home with me, and placed it into my bookshelf, as my mother is very probably there where Allie, Vicky and Jose were trying to go in the book.

31 thoughts on “B is for Book #AtoZChallenge”