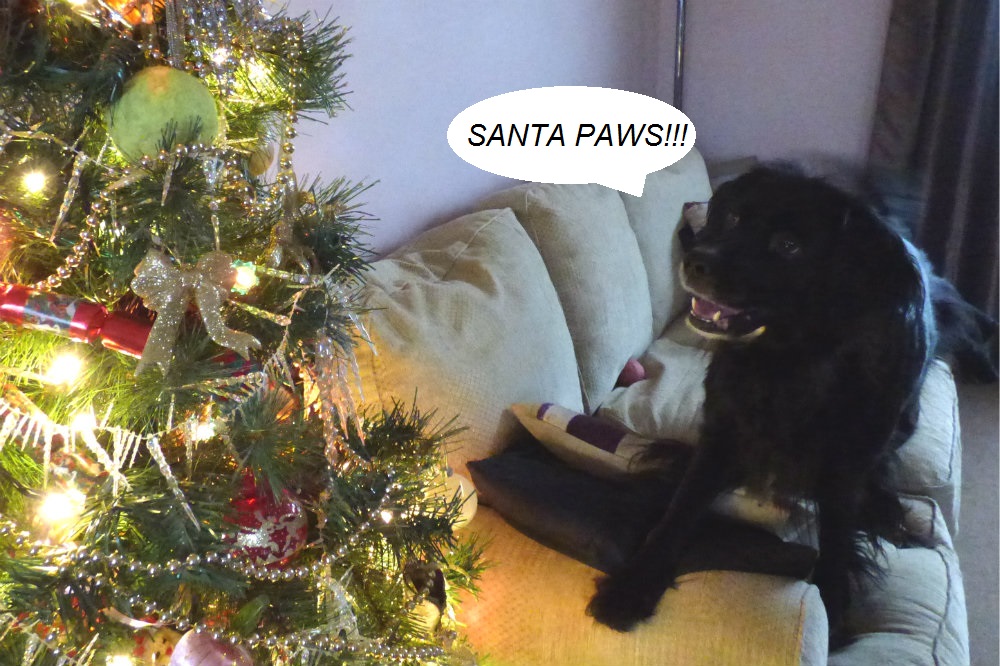 If the dog had more turkey that Christmas than me
Then that, she informs me, is how it should be;
While I can have chocolate, mince pies and cake,
(And any more naughtiness that I can bake)
She’s not allowed half the best of the stuff,
Which, as a deal, she considers quite tough.

“I, O great writer,” I heard the dog quote,
(As she choked on the sarcasm stuck in her throat)
“Am also omnivorous, rather like you,
It is only fair I have something to chew.”
And she sucked in her cheeks, looking all starved and thin,
Knowing only too well that I always give in.

She turned up her nose at a nice Brussels sprout,
(Though she licked off the gravy and pushed it about)
But she seemed to approve of the crisp Yorkshire pud,
‘Cause it went down so fast that it had to be good.
But it wasn’t the grail at the end of her quest,
“Get with it, O writer, and serve up the rest.”

She watched every sliver and morsel I carved
Determined the portions should fairly be halved,
Though her maths are not good and in her mind at least
Means a quarter for me and the rest for the beast.
“I’ll have some of that bacon, a sausage or two,
That should be me sorted… now how about you?”

I turn from the counter to get out my plate…
Realise my mistake… but by then it’s too late,
She’s wolfed down her own and my Boxing Day dinner
Was neatly disposed of and vanished within her!
She is licking her lips as she heads for the table
And dives underneath just as fast as she’s able.

It doesn’t take long though before she comes out
To investigate what the laughter’s about;
Fearing no retribution, she prances with cheek
Having eaten my meals for the rest of the week.
I still had the last of the nice Christmas pud…
“Are you making custard?” says she. “Custard’s good….”

“Now small dog, I ask you, is this really wise?
You won’t be so small in a heavier size.
I have not overeaten this Christmas at all
And I’ve worked off the cake playing fetch with the ball,
You’re not allowed raisins, the custard is mine.”
The small dog just laughed and said, “Have some more wine.”

“Now let me explain,” she said, “O writer dear;
It’s all about sharing at this time of year.
We’ve just shared the turkey,” (I said not a word),
“And given a good resting place to the bird.
If you don’t share custard, I’ll really be hurt,”
She grinned and continued, “Call it ‘just dessert’.”

And so we had custard the small dog and I,
And she had the top off the final mince pie
Then she made puppy eyes, and I answered her pleas
To finish her meal with a morsel of cheese.
And then I got cuddles, so how can I moan?
It’s better to share than be dining alone.