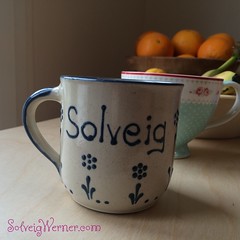 If we were having coffee then we would be having tea. I am currently drinking some Puh Er, but I can make you a Oolong (either from Taiwan or China) or a white tea, or a black or green one (these three are from China) if you wish. I can completely understand if you aren’t a fan of it’s rather agressive side. If we were having tea, then we’d be snaking on strawberries, apples, prunes and grapes as well as some other fruit. We would be trying to stay quiet as little on is sleeping in the other room and she is very much in need of sleep (I think she is having another growth spurt).

If we were having coffee, then I would ask you how you have been. So how are you? I’d ask you about your plans for the weekend and for next week. What have you planned?

If we were having coffee, then I would tell you about my doings of the past week. Currently S has Sundays and Mondays off, so we had a real weekend, as I had no work on Monday. We made the most out of the beautiful weather. We have suddenly landed in Spring, even though today it’s a bit chilly outside. I made the acquaintance of two of my dad’s friends whom I had heard of quite a bit in the past 16 years but hadn’t met so far. I took little one out to the playground that is less than 5 minutes from our house, she loves hanging out with the other kids, there are quite a few who are a lot older (it’s Spring Break) but they don’t mind her presence. There are some cool slides on one of the playgrounds and if I would let her we would be spending hours there.

On Wednesday I picked up my new insoles for my shoes. I had no idea that I needed a correction for my feet, but I actually need one, now it’s time to buy a new pair or two of shoes as I am not meant to have too flexible sole, and my Spanish plimsols are more than just flexible, and it is time to change anyways. Not this week but the week before I did an x-ray of my hips and bottom of my spine to see if I needed a little heel for my feets’ correction. Well no, but I have a dislodged vertebra at the bottom of my spinal cord (probably since birth, but it had not been discovered until now), so this means no more heels (my sister will be happy about this), and maybe some for of correction. It doesn’t hurt, so maybe there won’t be much done. My GP is currently on holidays so I’ll be able to tell you more in a few weeks.

If we were having coffee, then I would tell you that I had lessons with two new students this week. One is only for a short time, but the other will probably become a more serious client, I am already going to teach him again on Monday. I would also tell you that Monday I will be busier than usually as I am going to have another new student that day and will be running around quite a bit. I am really excited about all this, as I want to work a bit more.

If we were having coffee I would confess that yesterday I did not put up my A to Z post! 😳 I only put it up right before sitting down for coffee with you. In my defence, yesterday we had a great family day as S was off work, the weather was beautiful and I worked. So my T post will be written today, but I will probably put it up tomorrow. I am also hoping that I will find the time to write a #weeklysmile post for tomorrow. If you haven’t heard of the #weeklysmile or haven’t participated yet, then I do invite you to check out this beautiful event hosted by Trent, a fellow coffee sharer.

If we were having coffee, then I would also let you in on my plans for the weekend. Today I will be writing as much as possible, and spending some good time outside with little one. Tomorrow we are planning to go to the Petit Palais and then shoe shopping in the Champs Elysées Adidas store, as that one is open on Sundays.

I hope that you’ll have a great weekend! It was amazing having you for coffee, and if you want to participate yourself in the #weekendcoffeeshare or want to read some other chatty posts this weekend (and beyond) then please head over to Diana’s lovely blog Part-Time Monster!