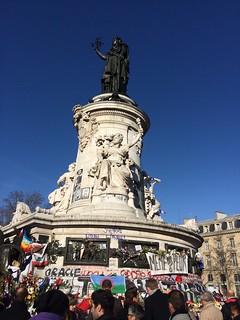 Up the steps and onto the Place de la République we walked. Camera teams, big crowds and people emotionally touched and shaken greeted us.

Two weeks and a day after the terrorist attack in Paris, I joined my family on our yearly Thanksgiving walk, which started with paying a tribute to the people who lost their lives on Friday the 13th of November 2015.

Today, a month and a day later, I want to try to put into words what I saw and felt on that walk. I want to write about it this year, and not next year.

Around the monument that can be found on the Place de la République crowds were in silence or only whispering, clearly in disbelief. There were still signs up saying “Je Suis Charlie” to which flowers, wreaths and candles had been added for the recent victims. Engraved on the monument, the word “Liberté” liberty/freedom can be read. I felt that these words put so much emphasise on what had been the target of the attack, freedom. 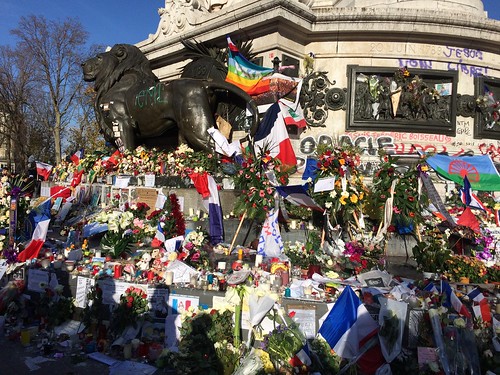 Everyone took the time needed to take in the unthinkable, to try to understand and grasp it. One of my uncles was clearly shaken as he had seen a father say goodbye to his daughter.

We left the Place de la République and made our way to the Bataclan, where most people had been deprived of their right to live. It seemed as though every street corner had been turned into a place of mourning, with ribbons, candles, wreaths, photos and flowers. When we arrived at the Bataclan the quantity of these things became overwhelming. There were pictures of beautiful young women, there were messages of hope and love. 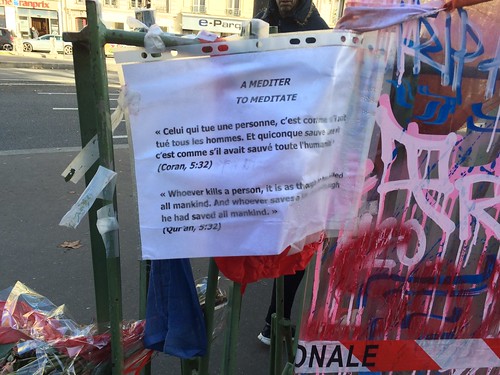 Even though there was police everywhere, it did not feel good to be there. The question of how safe one is in every day life came back with all its force. I had been to a concert at the Bataclan in, I think it was, February 2007, when I was 18, I saw the bands Black Daniel and Kasabian back then. I suppose that everyone who has been to a concert in the Bataclan, that all of the bands who had performed there were massively shaken in the aftermath of the attack.

I am so sorry for anyone who has lost their life, who has lost someone dear, who has experienced the unthinkable fears of that Friday the 13th.

8 thoughts on “A Touching Walk”