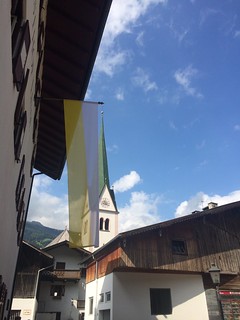 So on the morning of the 15th of August, we were waken numerous times by the sounding of the church bells (the church was about 200m from our room), and by music played by the village’s marching band. This was because the 15th of August is the Marien Fest, or Assumption of Mary, which is very very traditional.

And then the whole village, appeared, dressed in traditional clothing (some of the dresses the women wore were antiquities, passed from generation to generation, now over a hundred years old). Music was played, and then shots were fired, one for the mayor, one for the church, one for Restaurant as they were hosting the feast.

This is a very traditional event, something that is thankfully not overrun by tourists. But then again I do not see tourists walking from mass to mass in traditional clothing.

Not so long after the procession was over, we were on the way to an Alm (Alpine transhumance), it’s where the cows graze during the summer months. We got acquainted with a cow called Goldie, who I believe was already 13 years old, or maybe it was another one of those beautiful horned cows. Apparently dairy cows rarely pass the age of 6… These alpine cows were happy, in good health, and loved by their owner, who you could tell loved them back. The cows that belonged to the brother of chef of the restaurant had horns (something that is rarely done these days), wore big and small bells, because how else will you find them in the fog? Most of them were of a blond colour and some were of a chocolate brown.

I didn’t take pictures of the cows, for one my phone kept telling me there was no more space, and being surrounded by about 20 cows, some only half a meter away is a bit intimidating. I thought that it would be best not to play paparazzi with them.

text and photos (hosted on flickr) by Solveig Werner