She had always wanted to visit the collection of sculptures in Rhyolite, Nevada – always. But Rhyolite is so far out of the way from anything, it’s about 120 miles northwest of Las Vegas, on a paved, but very bumpy road, which winds its way through a landscape littered with Joshua trees, desert sage and interesting rock formations. It is about 4 miles outside of Beatty, Nevada, but really that doesn’t serve as much of a point of reference, as probably 99.99% of the world’s population doesn’t know where Beatty, Nevada is either. Suffice it to say – Rhyolite is in the middle of desert, in the middle of nowhere.

With a love of all things strange; strange buildings, strange art formations, strange landmarks, she was always searching for the new, but old. She was drawn to ghost towns such as a nail is to a magnet. To her, it was like walking back into the past, seeing the old, decaying buildings, and wondering – why people would think the site they built their town on, was a good site, and considering – why they left it as they did.

END_OF_DOCUMENT_TOKEN_TO_BE_REPLACED 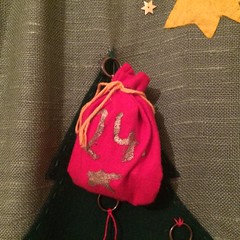 Most of my blog’s readers know this, I am German, but grew up in Germany the US and France. Still Christmas stayed a completely German affair. Not all parts of Germany are very Christmassy, nor are all Germans Christians. Still Christmas is important.

Today, I want to share some of my traditions for the 24th of December, or Heiligabend (Holy Evening).
The 24th of December starts with the opening of the last bag, window or door of the advent calendar. Because Christmas is almost here! Actually celebrations happen on the 24th rather than on the 25th. Today things are different for many Children in Germany, because most will be banned from the living room for most of the day.
END_OF_DOCUMENT_TOKEN_TO_BE_REPLACED