The Tale Of The Cursed Hat by Lucy Brazier

Once upon a time in a town far away, there lived a Hat-maker. His hats were the very finest hats money could buy and all the richest and fanciest people came from miles around to purchase his wares. His creations were fashioned from the most curious materials and stitched in ways unknown to other milliners. But they also had something rather quite special about them.

You see, the Hat-maker’s mother was a Cunning Woman who knew the ways of bending the natural nature of things to her own intentions. Using her tricksy devices she crafted various charms to be sewn into the hats, which flattered the wearer in ways other than a simple hat might.

From spring through autumn he made hats for every occasion but now in the twelfth month of the year he was busy building bonnets for the most important event of the year – the Christmas Eve Parade. The townsfolk would line the streets in all their finery, cheering marching bands and performers of all kinds as they ate and drank heartily in the name of festive spirit. His customers demanded the very best hats for this illustrious event.

There was one customer in particular who the Hat-maker always looked forward to serving – and not just because she was his most frequent and generous customer. Her name was Lady Emmy and she was the bright and beautiful eldest daughter of Lord Fitztightly, the very richest and very fanciest Lord in the land.

The Hat-maker was hopelessly in love with the divine Lady Emmy, but it was a passion that had to remain unrequited. For Emmy was a Lady and the Hat-maker a simple commoner. If he were to make his intentions known, he was sure that Lord Fitztightly would have him strung up from the nearest gibbet. Even though he was very wealthy from his thriving hat business, it wasn’t enough to make him a gentleman.

The Hat-maker sighed and returned his attentions to a particularly fickle ostrich feather that was in no mind to be fastened to a brim. His mother the Cunning Woman watched him from the shadows, her hearting aching as much as her son’s own. Muttering and tea-making were the only comforts she could offer him.

The shop bell tinkled into life and the Hat-maker looked up to see Lady Emmy bustling merrily through the door, her smile as bright as a thousand stars.

“Hat-maker! How pleased I am to see you! I have a proposition that you and you alone must accept.”

The Hat-maker was delighted to be in such demand and welcomed Lady Emmy into the plush embrace of his very best chair. And what she had to say delighted him even more.

Fidgeting with excitement, Lady Emmy breathlessly told him of her intentions. She had fallen in love with a commoner but her father would hear nothing of it unless he became a gentleman. Alas, there was no natural thing that the man could do to achieve this aim but Lady Emmy had something rather more unnatural in mind.

“A hat is a great indication of a person’s character,” she said “And a true gentleman has a true gentleman’s hat. A hat that only you could conceive and a charm fashioned to make the wearer a gentleman true. Tell me – will you oblige?”

The Hat-maker gazed into her wide, imploring eyes, his heart beating ever faster at the quivering of her lips. Of course! The regular purchasing of hats was just a reason to be in his company. Could it be that all this time she was finding a way that they could be together? There could be no other explanation. He took a deep breath.

“Lady Emmy, I shall do anything for you and you alone. I shall make the hat for your beloved with every notion that he feels exactly the same way.”

Lady Emmy leapt to her feet and wrapped her willowy arms around him. Placing a kiss upon his cheek, she made him promise that the hat would be ready for the Christmas Eve Parade.

At once, the Hat-maker set to work on the fabulous hat. It was to be the greatest hat he had ever made – a top hat, of course. Nothing else would do, for a true gentleman. His mother the Cunning Woman was elated for her son. She hoped that once he was a gentleman they would move to a smarter part of town and maybe she would have a maid or two. In order to ensure that the charm was unparalleled in its sorcery, she made a special trip to the mountains to fetch the rarest and strangest of materials. Using the sharpest of words she cut a slither of midnight from the sky to tie above the brim.

True to his word, the Hat-maker had ready the exquisite top hat on Christmas Eve morning. He had been forced to refuse other customers and even refund one or two, such was his dedication to the endeavour. But it didn’t matter. Nothing mattered now that he would become a gentleman and win the hand of Lady Emmy.

One of the footmen from the Fitztightly estate came to collect the hat and also to deliver the message that Lady Emmy required his attendance at the Market Square clock tower and seven that evening. He must not be a moment after.

The Hat-maker had no intention of keeping his lady waiting and at five minutes to seven he was swiftly approaching the clock tower in his very finest suit. His mother at his side, he was certainly the proudest man in town. But it seemed that almost all the townsfolk had been similarly instructed, as a huge crowd was already forming at the foot of the clock tower. The Hat-maker had to fight his way to the front in order to lay eyes upon his love.

But as he broke through the babbling throng and emerged, exhausted, at the front – he saw a sight that made him want to rip out his own eyes. There stood Lady Emmy, resplendent in festive red velvet and brandishing the magnificent hat. Before her, stood a strapping and handsome young man – it was Billy the candlestick maker from Bonkover Street! Why, the cad! All along it had been he that was the focus of her desires.

He watched in horror as she smiled and rose to her tiptoes to place the hat upon Billy’s head. The second the brim touched his brow, the whole town could see that he was, in fact, a gentleman. Everyone remarked that never a truer gentleman they ever did see. Lady Emmy beamed with delight and kissed her beau with a passion the likes of which should not really be seen in public. Her father approved the union and declared that they would be married on New Year’s Day.

As snow began to fall and the air filled with sound of carollers, Lady Emmy and her candlestick maker danced and sang and revelled in their happy ending.

Except, that wasn’t really the end as the Cunning Woman – horrified at seeing her son’s heart shattered into a thousand pieces – immediately cursed the hat and all those who would wear it. What followed was a bloody and violent wreaking of revenge of a scorned mother, which continued down the centuries claiming many victims. But that isn’t very festive so I thought I’d leave it at the romantic bit. 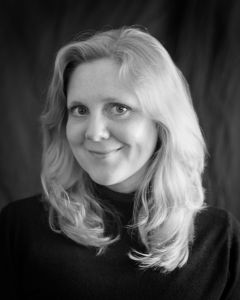 Lucy Brazier is thirty five and lives in Cambridge, England. She started writing from the age of ten when her primary school teachers where not sure what do with her. A disruptive and noisy child, they tasked her with writing stories for the younger children in a bid to keep her from distracting her peers. She developed her skills throughout her teenaged years, when she was inspired through her Classics lessons to read the works of Homer, Livy and Virgil. Her teenage years also saw her develop her other great passion of music, where she heartily threw herself into several years of misbehaving and playing bass guitar in unsuitable rock bands.

For many years she didn’t write at all, but did widen her literary horizons through the works of Terry Pratchett, Oscar Wilde and Flann O’Brien – the latter of which remains her favourite writer. Lucy developed a penchant for the unusual and the absurd, something which was surely exacerbated by her time serving as an officer with Northamptonshire Police where the many varied experiences and characters she met had a profound effect on her outlook on life, the universe and everything.

Jaded by seven years on the front line and driven by a fascination with Inspector Morse, Lucy applied on a whim for the job of Deputy Head Porter and one of the foremost Colleges of Cambridge University. To her great surprise (and that of many others, certainly) she landed the role as the first female to don the iconic bowler hat in the College’s six hundred year history.

Having left formal education at the age of sixteen with little to show for it, being thrown in among the academic elite was something of an eye-opener. Documenting the quirks and foibles of College life on social media, Lucy was soon persuaded to start a blog – Secret Diary Of PorterGirl. Acutely aware of the dim view taken by College officials of any slight upon their reputation, she wrote anonymously and in such a way as to disguise the true identity of the now notorious Old College.

However, her blog was discovered by the Head Porter who gleefully reported her to The Bursars, furious at his portrayal. It did not end her career (in fact, one or two of The Fellowship found it rather entertaining) but being quite possibly the worst Deputy Head Porter of all time did and six months later she chose to hang up her bowler hat and pursue her dream of becoming a writer. Lucy considers this the best decision she ever made.