I have mentioned before, that in my family the Christmas tree is revealed on the 24th of December, this way it can be fully enjoyed during the twelve days of Christmas. Some people have the tradition to take it down on Epiphany after letting all the candles burn to the end, others, according to wikipedia, wait until the beginning of February to take down the tree.

On the 22nd or so, I saw someone put their Christmas tree into a tree bag outside of their house for pickup, a bit too early, and I have seen quite a few trees collected in the nearby park yesterday (some years as early as the morning of the 25th you can find out chucked out trees…). If we would do that, then we’d have either no tree at all, or get rid of it after too little time.

So today, on the 3rd day of Christmas I want to join in Hugh’s Photo Challenge: Week 8 – Charity Christmas Tree Topper Challenge by sharing what’s on top of the tree, but also what else you can found in the room dedicated to Christmas. Sorry for the quality of the pictures, the lighting was not optimal…

This angel sits atop the tree. If I recall correctly he was a present my paternal grandmother made for my parents. Over the years his face made from wax has lost it’s contours. When I was little, he was holding candles in his hands, but they melted with the heat from tree’s candles below. 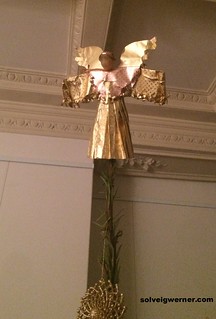 Some years the golden angel is replaced by this white angel that my mother crafted. Her reference was the angel above. This one you can see the fine type face the other used to have, but that melted away. Next to the angel you can see a Santa Claus/Sankt Nikolaus, which I think was one of my creations as a child, but it might have been my sister’s. 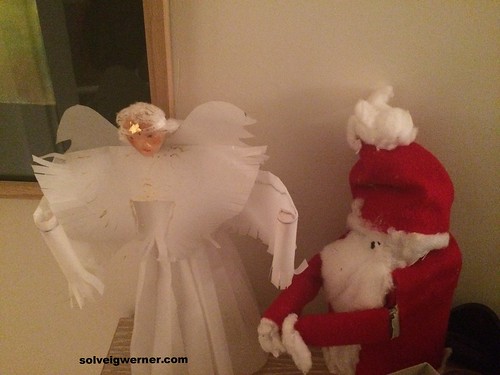 So that’s for what you can find on top of the tree, but what about what was below it this year? Some years there are presents below the tree, I also recall my grandparents’ dog sleeping beneath it. This year, there were no dogs or presents, but the nativity scene. My aunt made it for my dad when she was a teenager. It is probably as old as I am… 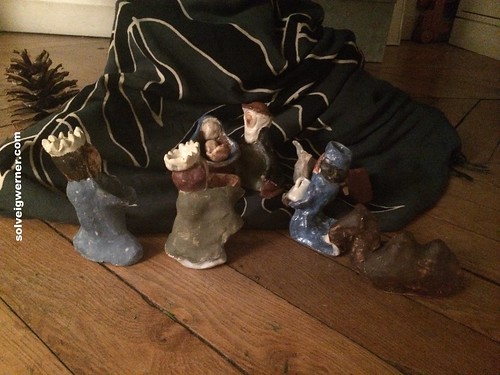 Over the years the handmade decorations on the tree have grown sparser, even the traditional wooden figurines like this little angel have lost their prominence in my parents’ tree. 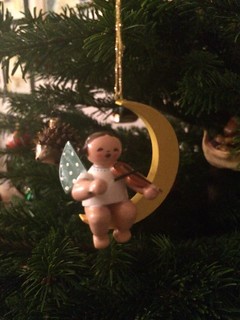 As fine decorations made from glass have made their appearance. 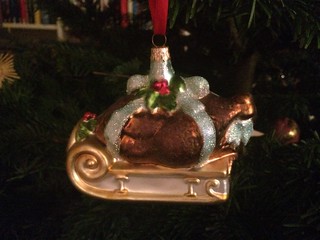 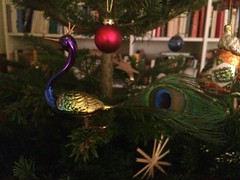 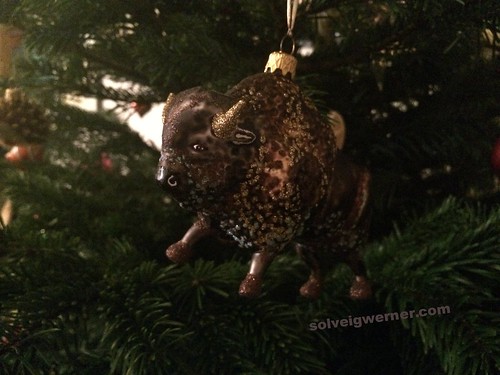 Some of these decorations are the characters from A Christmas Carol. 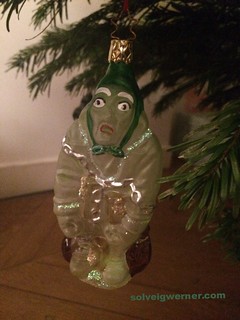 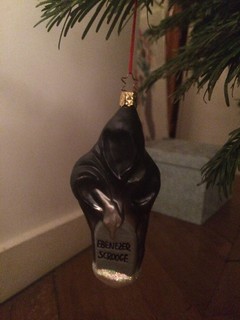 Besides the angel and the Santa Claus I showed you above, other figurines can be found, such as this Bergmann Engel from the Erzgebirge. 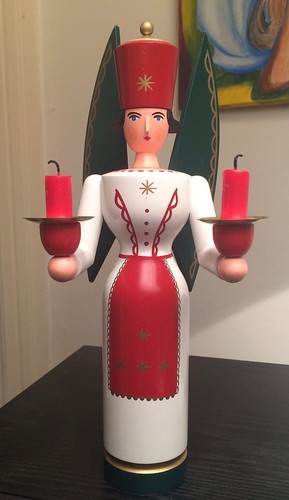 I hope that you liked getting a small peak at my Christmas decorations. Enjoy the time “between the years”, as Germans call the time between Christmas and the New Year.